Innocuous and often underestimated, the humble barrel is an important symbol of international commerce. Historians believe that the earliest recorded use of water-tight, barrel-shaped wooden containers was by the Celts in 350BC. They were durable and easy to move around, making them the most efficient and convenient form of storage for two thousand years.

In the Middle Ages, craftsmen who rendered barrels were known as Coopers and their wooden vessels were in high demand for daily tasks such as drawing and transporting water, collecting milk, preserving condiments, bathing, washing clothes and crushing grapes.

Robust, flexible and chemically pure, oak was the favoured material used to craft these barrels and they maintained their importance until the twentieth century when they were displaced by the introduction of pallet-based logistics, containers and the growing popularity of steel and glass.

In some industries, however, economics and efficiency pale in comparison to authenticity. Despite modern technology and the availability of contemporary materials, wooden vessels remain at the core of the wine and whisky industries.

Since 1821, large oak barrels have also been used by Belgium’s world-renowned Rodenbach Brewery to ferment their classic Flemish red beer. These large, carefully constructed barrels are known as foeders. The movement in the barrels is sparked by the slow entry of oxygen molecules that seep through the oak staves. In these very large vessels, the maturation process slows down, allowing the biological changes to unfold slowly which changes the flavour of the beer.

Rodenbach’s cellars contain 294 oaken foeders that date back to the 1830s. Their beer goes through a biochemical transformation inside these barrels, emerging dry, fruity and acidic over two years. This style of long-term aging extracts tannins from the wood which increases the perceived bitterness of the brew. Yeast and bacteria live in the pores of the oak barrels and these are carried between batches which gives a brewery its unique flavour profile.

The Rodenbach family established the brewery in Roeslare, a town in in the Flemish province of West Flanders. Rodenbach family members played important roles in Beglian history. The family line boasts military men, writers, brewers and entrepreneurs, revolutionaries and politicians.

Pedro Rodenbach took part in Napoleon’s Russia Campaign that led to Belgium’s independence. His brother, Constantijn Rodenbach wrote ‘Brabanconne’ the Belgian National Anthem and three Rodenbachs were present when Belgium was founded. In 1821, the four brothers: Pedro, Alexander, Constantijn and Ferdinand, invested in an existing brewery and agreed to a fifteen-year partnership.

At the end of this period, Pedro and his wife Regina bought the business and in time, their son, Eugene took over. He introduced the oak foeders that have become synonymous with distinctive, Flemish sour beer. Eugene had studied vinification (the process of winemaking and fermentation) and learned how to combine older, sour beers with younger ones to achieve the perfect balance. Flemish beer dates back to the Middle Ages – experience taught brewers that sour beer containing lactic and ascetic acids will preserve it for longer. Eugene Rodenbach collected the first of the oaken foeders that are housed in the cask halls at Rodenbach Brewery today. They are protected as part of the industrial heritage of the Flemish Community.

Palm Belgian Craft Brewers bought Rodenbach in 1989 and it has since been acquired by Swinkel’s Family Brewers. Original buildings have been restored to their former glory and a new visitor’s centre and museum opened in 2002. The original malting tower takes pride of place next to state-of-the-art equipment.

While the brewery has been modernised, it has not lost any of its character. Site manager and current brewmaster, Rudi Ghequire, has been instrumental in protecting and promoting Flemish, mixed-fermentation beer. Rudi began his career at Rodenbach in 1982, purchasing raw materials while studying agricultural engineering. Passionate and creative, he went on to study brew engineering and achieved his Masters in World Wine. He makes comparisons between winemaking and Rodenbach’s brewing methods, noting that with beer, ‘you have much more flexibility’; brewmasters can inject their creativity into the raw products as well as the production methods and blending. As Rodenbach toasts on their website, “cheers to the unexpected!’

Rodenbach brew a variety of specialty beers which are produced by blending aged brews with fresh beer in complex ratios. The Classic Rodenbach is their principal beer, matured in oak for two years it has a complex fruitiness which is comparable to wine. Rudi notes that Classic Rodenbach has high drinkability with apple, oak and caramel notes.

Grand Cru is an exceptional Flemish ale, boasting complex fruitiness, a sour taste and aromas of balsamic vinegar due to its lengthy maturation period and composition: two-thirds aged and only a third fresh beer. Rudi describes the methods used at the brewery as the ‘triangle of taste: sweetness, dryness and acidity.’ The blending process reduces the acidity of the beer and creates the famous flavours of Rodenbach.

Each year, the top performing foeder is selected to produce a Vintage blend – a superior Grand Cru that is one hundred percent aged beer.

Heron Beverages is proud to announce that Rodenbach’s Vintage 2017 has just been released for pre-order. Available in 375mL bottles, the Vintage 2017 brew matured in Foeder 198 and is characterised by acidic apple, notes of caramel, wild honey and oak with a hint of vanilla, cherry and liquorice.

Inspired by the unassuming oaken barrel, Eugene Rodenbach’s passion for Flemish ale and innovation lives on in the vintage blends produced each year. Rodenbach Vintage 2017 is available for limited release now. 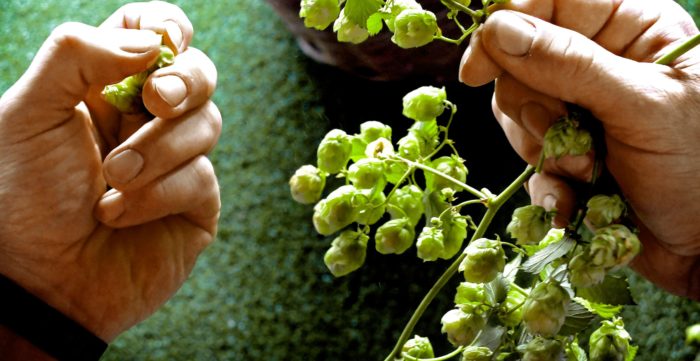